The Patriots Will Nickle and Dime You to Death!

There's a growing trend for the Pats to use "sub" packages as their "standard" defense and it doesn't look like it is going to stop anytime soon.

Share All sharing options for: The Patriots Will Nickle and Dime You to Death!

There was a time when defensive alignments were a little easier.  You had 3 or 4 men on the line, 3 or 4 guys "backing" them up, and 4 defensive backs - two corners and two safeties.  Life was simpler with the "standard" defensive alignment.  You'd just sit on the porch of your manor house, sipping your julep while a cool breeze wafted in from the magnolia trees.  Then all of the sudden that life was gone with the wind.

The NFL became a pass first, pass often, option out of the run and pass some more league.  Running backs are devalued, big blocking fullbacks are on the endangered species list, and offenses are spreading, bunching, and cramming as many eligible receivers as it can get away with on the line.  They are big and strong, small and fast, big and fast, and small and strong.  There are guys that can snap you off at the ankles as they come out of their routes, burn you big time down the field, or out muscle you on the edges.  What's a self-respecting defense to do?

As offenses change, defenses must adapt.  There was the addition of the nickel back to cover the slot receiver (usually) at the expense of a linebacker.  There was the dime back to pick up a guy on the other side as a receiver or back was added to the line; again, a linebacker sat down.  They even went as far as a quarter package to add another corner while dropping out a lineman.  By removing the beef from the field, teams open themselves back up to running plays.  By leaving the beef on the field they open themselves up to getting burned with a deep pass.  Limit the damage, stay in the game.  That's the general trend.  "Bend but don't break", in Belispeak.

The Patriots spent 67% of the time last year in nickle or dime formations, that's two thirds for people who prefer fractions, and two out of three for TV ad men.  That's a trend that isn't changing.  When you spend more than half your time in a "sub" defense, doesn't it make sense to just call that your "base" alignment?  The Patriots in 2014 will have at least 5 DBs on the field at least 67% of the time this year.  Mark it.

This is the first year in recent memory where that thought doesn't strike fear into my heart.  We actually HAVE 5 defensive backs that I don't mind seeing on the field at the same time.  We have one who was ranked tops in his position last year, and another that can shut down half of the field.  In addition we have another 5 that are as good or better than almost anyone we've fielded since 2004.  I'm positively tingly writing that!

Ladies and gentlemen, may I present your 2014 defense?

Starting with the backside, we have Darrelle Revis who will single-handedly shut down the opponents' top receiving threat.  Belichick and Patricia spends days each week trying to figure out how to remove the opponents' top weapon.  Simple enough.  Put Revis on him.  What is Hoodie going to do with all of his extra time?  Why not figure out how to remove the second and third weapons as well?  How do we do that?  How about having a smart and speedy free safety that can lend a hand wherever needed?

Devin McCourty was PFF's highest ranked free safety in his first full year at the position and PFF chose him as their first team All-Pro over second team Earl Thomas. Yes, he's THAT good.  Alec already pointed out Devin's brilliant move to knock the ball back in-bounds for a Cole interception.  Brains, beauty, AND athleticism; he's the complete package.  He allows corner backs to be aggressive off the line and in their routes because he's got their backs.  Likewise with his corners in tight coverage, he's got a little more leeway to to look for stray balls that may be floating through the air.  It's a give and take sort of thing.  Also, since half the field has been converted to Revis Island, he's got less ground to cover.

A new addition from the 2013 Legion of Boom, is 6' 4" 221 lb Brandon Browner.  He's got strong safety size and wallop and an ability to jam and cover in man.  Sometimes corners have a tough time with tight-ends or bigger receivers.  The answer?  A bigger corner back, and Browner's that guy.  Guys of this size tend to blur the lines a bit on the formation.  While he's technically a DB, you really haven't lost as much size over the linebacker he replaces.  You can go to a lighter defense without completely selling out to a lighter defense.

While we're talking about 'tweeners, I'd like to mention Jamie Collins.  He's a linebacker/DE that has played both corner and safety.  In other words he can cover, and not just linebacker "cover", he can really cover (ask Wes Welker).  This is blurring the lines the other way.  You have a linebacker that doesn't have to come off the field when you need coverage.  He's just one of many "multiple" players on this roster that can be plugged into multiple positions and thrive.  Oh, NOW I know what Belichick and Patricia will be doing with their spare time; figuring out how disguise coverages, so quarterbacks don't know what hit them! 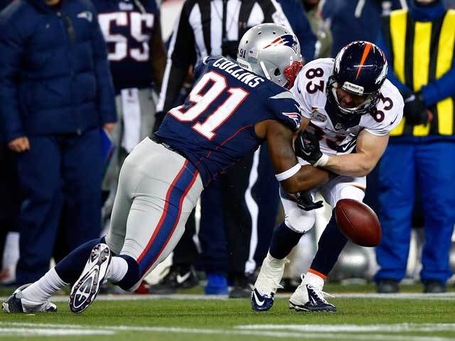 Jamie Collins in coverage: via media.thedenverchannel.com

We're still looking for 5 defensive backs on defense, but first let's look at a little "instant offense".  Logan Ryan had a solid rookie year amassing 10 passes defended, 5 interceptions (1 TD), a forced fumble and 1.5 sacks.  His teammates nicknamed him "instant offense" since the ball would come his way and they'd instantly be on offense.  This kid is just too good to waste on the bench.

While I used to hate seeing the spread, now I welcome it.  It might just lead to a little "instant offense" for us.

Strong safety was a mixed bag last year until Duron Harmon took the job full time.  He's a sure tackler who generally takes good angles and isn't lost in space.  He also took on the role of TE defender where he defended 4 passes and pulled in 2 interceptions.  He has room to grow, and some of his duties may be picked up by Browner, but the kid is still trending upward.

Another guy who had a strong season is Alfonzo Dennard with 8 passes defended and 1 interception.  He was often asked to pick up the teams second receiver, which he did well, and occasionally their number one receiver which he didn't do as well.  With his legal issues behind him, here's hoping for another solid season.

Finally, we have a guy that most of us don't mind seeing in the slot, and hope we never see anywhere else: Kyle Arrington, who defended 12 passes, forced 2 fumbles and intercepted one pass.  With the depth in the secondary, Kyle should be able to stick to his strengths, and the speedy slot guys.

For those keeping count, that's 7 defensive backs and a linebacker that can cover like one.  While I used to hate seeing the spread, now I welcome it.  It might just lead to a little "instant offense" for us.

While many things might change in our coverages, one thing won't:  the guy wearing the green dot, Jerod Mayo - the QB of the defense.  Indications are he's coming back as strong as ever.  Mayo is sideline to sideline and solid in coverage.  He excels in lining up his defense and playing the role of cleanup - the "safety" of the linebackers allowing other guys to charge forward while he covers their gaps.  He was on pace for around 150 tackles again when he was injured last year.

His partner in crime this year is the big-bodied Dont'a Hightower.  A lineman sized linebacker, who struggled in coverage when he was forced to take over the green dot from Mayo, but came on like gang-busters as the season progressed as outlined by Rich Hill. He'll be taking over the Thumper role that Spikes abandoned, but he'll look better in coverage while doing it.

BTW, all of our starting linebackers are decent blitzers.  So while we may not have as many linebackers on the field they can still help with pressure.

Up front we have some intriguing options.  Vince Wilfork who is primarily a block-eating run stopper, but can dominate at NT, DT or DE as needed., He can force-feed the center to his QB (ask Joe Flacco and Mark Sanchez) if not accounted for.  There's also backup Sealver Siliga who took over the role admirably when Vince went down.  We have Tommy Kelly who was a pressure creating stud before being injured.  He can likewise move about the line like Vince with abandon.  There's also Chris Jones who filled in well in that role when he was injured. 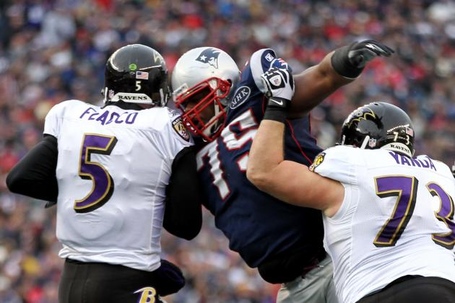 Added to the mix this year is a Belichick gamble who could help us win big:  Dominique Easley.  The guy has one speed and it's straight toward the QB.  You'll notice him when he's playing because he's the guy hitting the O-line before they are even out of their stances.  Don't expect to find him anywhere consistently because he can play any position on the line.  Toss him in at 0 tech and he'll create havoc, toss him out at 7 tech or even wide 9 and he'll get to the quarterback.  He might not start right away, but when he starts there's no stopping him.  When the offense tries, they'll likely pull false start or a holding penalty.

That brings me to the hardest working guys on our defense:  the athletic Chandler Jones, and the high effort Rob Ninkovich.  These guys played a riduculous number of snaps last year.  Chandler led the team with 11.5 sacks and a forced fumble.  All of which with very little inside pressure.  Likewise, Nink posted 8 sacks and two forced fumbles.  While they are still going to be doing the lion's share of the work, Michael Buchanon (2 sacks) and FA Will Smith (6 sacks, 2 PD)  should be able to give them some time to catch their collective breaths.  With an increase in inside pressure, and tighter coverage on the back end, I'm looking for Nink and Jones to have a field day in the offensive backfield.  BTW, Nink can play linebacker (and covers pretty well 2 ints and 4 PDs the year he did it full time), and Jones isn't above kicking inside to DT.  Just more guys that can be moved anywhere a defensive genius wants.

With the increase in play we should be seeing on the back end, and the options the Hooded One has in the front seven, this should be the best defense the Patriots have had in the decade since 2004 which BTW, was a year that turned out pretty well.   But with all of the differences on defense, one thing won't change.  The Patriots defense still will nickel and dime the offense to death.  The biggest difference is this year, I'm excited about it!