Have the Patriots done enough to put Tom Brady in the best position to win another Super Bowl ring? What if they've done the best they've could?

Share All sharing options for: Patriots, Passer Rating, and Winning the Super Bowl 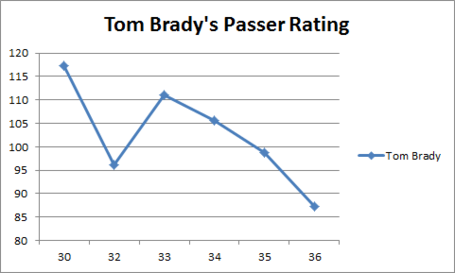 Look at the picture. It's Tom Brady's passer rating in each season after his 30th birthday, starting with his historic 2007 campaign. If a picture is worth a thousand words, then this is equivalent to Bill Belichick talking about the history of special teams.

Yes, last season saw an incredible amount of turnover and injury at all positions on offense, and Brady still succeeded.

Yes, the offensive line had a down season and couldn't provide Brady with the necessary protection to perform.

Yes, a healthy Rob Gronkowski, Aaron Dobson, Danny Amendola, and Sebastian Vollmer would do wonders for the offense that scored the 3rd most points in the league (although they ranked 9th with 2.10 points per drive, lowest since recording 1.98 in 2006).

But that graph needs to major upswing in the 2014 season if we're expecting Brady to carry the team to the promised land.

So let's say, hypothetically, that Brady is where he will be for the rest of his career; a quarterback who produces at slightly above the league-average level for the next few seasons. Averaging his last two seasons, Brady's passer rating has roughly been 10% better than the league average, or amongst players like Tony Romo, Matt Ryan, and Ben Roethlisberger. Just outside the top five.

Assuming Brady can continue that level of production of 10% better than average, a passer rating of 91.1 seems fair- and it's a mark that would place the Patriots in the top 6 of the league when comparing to franchise averages over the past five seasons (behind Aaron Rodgers, Drew Brees, Philip Rivers, Tony Romo, and Peyton Manning).

Can the Patriots still win with Brady? Well, of course, since they have made it to the conference championship in each of the past three seasons. He can be the entire reason why the team wins (last season is a prime example).

But he shouldn't have to be the reason why they win. Not at this stage in his career.

So instead of pumping the offense with more weapons and forcing Brady to win on offense this off-season (and let's be serious, they already added to the offense last season with Amendola, Dobson, et al), the team has invested heavily  on the defensive side of the ball.

History shows that this is the smart investment if the team wants to win a ring.

Let's talk about Passer Rating Differential (PRD). It's considered one of the holy grails of football statistics, with the team owning the better score winning over 80% of the time.

It's simple. It's the difference between the team's passer rating (PRF) and the passer rating allowed (PRA). A simple regression between passer rating differential and a team's winning percentage shows an r-squared of 78.6, making an extremely well-fit line.

The regression equation implies that every 6.25 points of difference between PRF and PRA will yield an additional win for the team. So improving the defense is another way of improving in this metric.

The addition of Darrelle Revis (and Brandon Browner) to the secondary should greatly improve the Patriots on the defensive front. The Patriots ranked 14th and 16th over the past two seasons, chronologically, when defending opposing #1 receivers per Football Outsiders.

In Revis' 2011 season (2012 was stopped early by injury), his defense ranked 1st in the league in defending oppose #1 receivers, while his 2013 production in zone defense was akin to a snuggie. He ranked 1st in yards allowed and 2nd in targets per snap according to Pro Football Focus.

The direct difference between Aqib Talib covering the opposing #1 and Revis performing the same role in New York is roughly 200 yards and 10 receptions over the course of the season, and that's not factoring in Devin McCourty leaning towards the opposite side of the field to help defend the #2 receiver- a particular facet of the defense where the Patriots ranked 29th in the league last season.

The difference between Talib and Revis, while still just a projection, improves the Patriots defensive passer rating by over 3 points; the increase is worth roughly half of a win.

More importantly, it removes the need for improvement from the shoulders of Brady and shares the load with the rest of the team. Brady will hopefully return to beyond the league average- and maybe back into the top 4. If Brady improves his passer rating back into the high 90s (remember that he posted a cumulative passer rating of 96.7 with a healthy Rob Gronkowski), that would be an additional expected win on top of the defensive improvement.

This season will come down to how the Patriots have hedged their risk. This off-season is a vote of confidence in Brady and Gronk and Amendola and the rest of the offense. The year's improvement also has protection built in as the defensive growth could be greater than that of the offense.

Passer rating alone won't hand the Patriots a Super Bowl trophy. The relationship between passer rating differential and winning percentage declines in the playoffs (r-squared dips into the 60s). But the Patriots have set themselves up for success- and it all won't rest on Brady's shoulders.