Should the Patriots Slow Down the Offense?

The Patriots have had an issue with injuries over the past few seasons. Could slowing down the tempo be the solution?

Share All sharing options for: Should the Patriots Slow Down the Offense?

Per Pro Football Reference, the Patriots rank 19th with 563 offensive drives over the past three seasons. Somehow, Bill Belichick and Tom Brady's offense rank 1st in total number of plays during that same span. You could point to drive sustainability. You could point to offensive style- the infamous "Death by Papercuts"- as the reason.

For reference, here are the rankings:

Either way, the result is a league leading 77.2 plays per game.

While this makes for entertaining football, it might not make the most sense from a sustainability standpoint. Not every team can have the same degree of health that Chip Kelly's Eagles enjoyed last season (although I hope Belichick and Kelly have had their chat). For the average team, all those added plays are just more opportunities to be injured.

In fact, the Patriots are one of two teams that could be severely harming their long term sustainability. Along with the Detroit Lions, New England is essentially adding a 17th game to their schedule.

The 97.5 additional plays above the mean that the Patriots run over the course of the season are equivalent to playing 1.37 more games on the schedule. The Lions aren't far behind with 1.06 added games (AG).

On the other side of the spectrum, the Panthers, Bucs, Seahawks, and 49ers have been saving their offenses from the wear and tear of two thirds of a game. Should the Patriots face any of these teams at the end of the season, it would have been similar to New England playing with two extra games of differential under their belt.

Gonig beyond head-to-head advantages, there are some clear season-long implications of playing so many additional snaps.

A 2010 study by the NFL Players Association (NFLPA) showed that teams were averaging 3.7 injuries per week, up from 3.2 over the prior eight years. Between 2010 and 2011, the injuries per week increased to an average of 4.2 per week, with injuries resulting in minor lost time (1 to 3 weeks) increasing 17%.

We've seen the average number of plays per game increasing in recent years and it will continue to lead to more injuries. 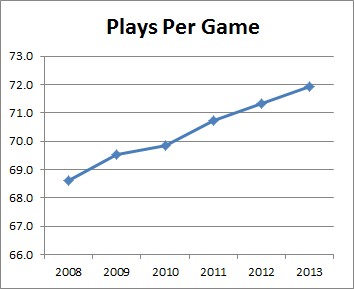 The Patriots have arguably had the worst luck with health in recent times, having been forced to play without their best players year-after-year. As the team continues to invest in players with a history of injuries, it might be in the team's best interest to adjust their style of offense to reduce the chance of injuries.

The team looks to have a stifling defense. Perhaps slowing down the offense will allow the players to be healthy deep into the off-season.