Logan Mankins is the Answer at Left Guard

Logan Mankins is currently an elephant in the room. Let's build with the elephant.

Share All sharing options for: Logan Mankins is the Answer at Left Guard

Logan Mankins isn't going anywhere. He's a locker room leader; a Vince Wilfork on the offensive line. He's one of Tom Brady's most-trusted linemen. He was also extremely inconsistent in 2013.

With center Ryan Wendell playing flat in his second year at starting center, Mankins has an easy excuse for why he wasn't on the top of his game. Trust between linemen is key to success and the trust just wasn't there. Mankins played hard every snap and even played well when asked to play at left tackle, which leads some credence to the fact that Mankins is sticking around.

But the consistency? That has to improve. Mankins is under contract for three more seasons and is the second or third highest cap hit on the roster for all three years. For a player to hold so much of the cap at Mankins' 32 years of age, they must be elite. They must be worth the money. That's just the nature of the business.

If Mankins is declining, and the general consensus is that his past few campaigns have been his weakest, then the bridge with Bill Belichick as the salary cap troll will be approaching much faster than anticipated.

So let's check the numbers; is Mankins in decline? 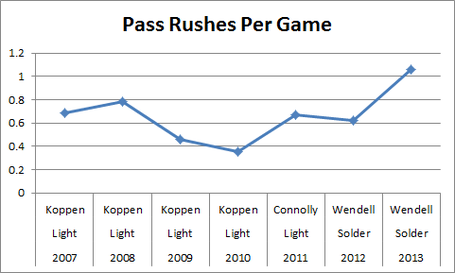 By the looks of this graph, he's been in decline since his prime in 2009 and 2010. Pass Rushes per Game is a fake stat that I created, based on numbers courtesy of Pro Football Focus. Basically, a sack is worth 1 point, a quarterback hit is worth 0.5 points, and a quarterback hurry is worth 0.25 points, summed together into "Pass Rush Production" (PRP). The above is the average PRP against Mankins over the last few years.

The graph also shows who was playing Center and Left Tackle for the majority of those campaigns.

There's no question that 2013 was Mankins' worst when it came to protecting Brady. Whether it was communication with Wendell, or Mankins own errors, Brady was not safe in the pocket like he has been in recent memory.

Of course, these numbers strip context, which don't account for offensive inadequacy and the fact that Brady wasn't able to find as many targets as easily as he had in the past.

And if we are giving Brady a bye-season due to the circumstances, why can't we do the same for Mankins? It looks like in 2012 he was protecting Brady just as well as he had in 2007 and 2008. Let's give Mankins an extra year in pass protection before declaring his downfall.

As for Mankins in the running game? 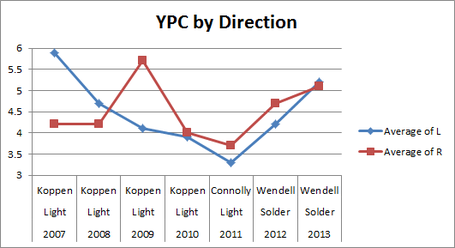 What we see is Mankins first recorded year where running backs were gained over 5.0 yards per carry to both his left and right. He'd never done it before. He set a new personal best in 2013, which is a testament to his ability, especially as teams knew the Patriots had to run to compensate for the passing game.

What might be more interesting is we can see the career trajectories of a few players. We can see Light slowing down in the twilight of his career, as well as Solder's growth from 2012 to 2013 (and his improvement over Light). We can also see the improvement in the run game that Wendell provided above Dan Koppen and Dan Connolly.

Sure, it's not a vaccuum and Stevan Ridley is a much better back than Laurence Maroney, but the results paint a developing picture.

We see Mankins with a blip- maybe it's big enough to be considered a bloop- on his radar in pass protection, and his best-ever season in run blocking.

Maybe calling for the end of Mankins is slightly premature. I'm going to give him the benefit of the doubt and see if his production in 2014 can change the narrative into a more positive light. Perhaps improved play at center will help Mankins do a better job at protecting Brady.