Last season we saw Tom Brady lose all of his toys- and the ones that came back were broken. This year there is no excuse.

Share All sharing options for: Patriots Consistent at Receiver

In 2013, the Patriots returned just three of their top eight receivers from 2012. Two of the returning players were injured (Rob Gronkowski and Shane Vereen). The third player was Julian Edelman.

The Patriots offense ranked 25th in points scored through five games. Over the final 11 games of the season, the Patriots ranked 2nd. Alternatively, the defense went from ranking 3rd to 19th over those same splits.

The common thread around the 2013 off-season was how this type of receiver turnover was unprecedented and how quarterback Tom Brady had a get-out-of-jail-free card because of all the new faces. There were obvious growing pains during the year and the team took five games before they resembled a viable offense.

Still, the hyperbole around the Patriots receiving turnover situation must have reached a critical point when the Patriots only posted six points against the Bengals. There's no way the turnover was that bad, right? 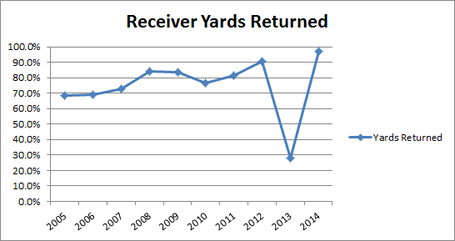 Or maybe it was. The Patriots brougt back a mere 27.8% of its 2012 receiving yards, and that's including a half-healthy Rob Gronkowski. The Patriots hadn't fallen below a 70% return rate since nearly a decade ago.

This 2014 season will be different. The Patriots haven't returned this much yardage in over a decade. The team is returning its top nine receivers from 2013, as well as 11 of its top 12 (Austin Collie and his 63 yards is the lone exception). The team's 97.3% return rate is an extremely positive sign for overall consistency and production. 2012 has been the only other time in the past decade where the team returned over 85% of its receiving yardage (90.5%).

While not all of the top nine receivers are locks for this upcoming season (#7 Brandon Bolden and #9 Josh Boyce are potential roster casualties), it wouldn't be a shock if all made the team. With Stevan Ridley at #11 and James Develin at #12, the team could reasonably bring back 11 of its top 12 receivers.

Look for the young players, and even the veterans, to improve in 2014 as they all field more experience in the system.