The Beautiful Magic of Brian Tyms

The play of the game never counted. But my goodness it deserves to be celebrated.

Share All sharing options for: The Beautiful Magic of Brian Tyms

Every season the Patriots bring in a wide receiver to play with our emotions. He flashes acrobatics and hands and route running ability that leads fans everywhere to believe that this player is the steal of the year. They'll be the next Rod Smith or Wes Welker or two-hamstringed Miles Austin.

But they never pan out. They get cut at some point to a collective shaking of heads around Patriots nation and then we move on. We forget about them and everything they inspired during the preseason.

Collectively, the preseason stars provided the Patriots and the NFL with 0 receptions, 0 yards, and one silver medal in a 4x400 relay.

It's now 2014 and the latest challenger has already started to create a legend. Go to his wikipedia page and you'll see his receptions, yards, and touchdowns updated to read "infinity". I'll call it "Infinityms" 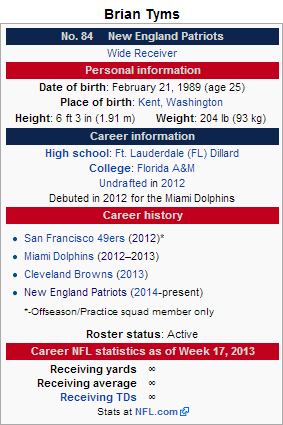 What we have is undrafted second year wide receiver Brian Tyms who is currently suspended for the first four games of the NFL season and will likely be cut and brought back aboard as deemed necessary. The suspension is because Tyms took Adderall for his ADHD, which he is correctly diagnosed as having. Adderall is on the league's illegal substance list and Tyms' approval for his medication request didn't take place until after he failed the drug test.

But that's not the point. We're here to watch his crazy silly stupid touchdown that never was and enjoy it in all its insanity (Tymsanity?):

That's a touchdown that would have been confirmed during the regular season. Too be fair, some schmoe was standing in front of the camera with the best angle so I doubt it would have been overturned if challenged, but we can still dream.

And we can always watch Tyms jump into the stands after his actual touchdown reception:

Tymsanity. It's here until it's not (and if we know Bill Belichick, it'll be sooner than we expect). Get hyped.