Logan Ryan's Pass Interference Was a Terrible, But Reasonable, Call

While the Raiders might dispute the holding call at the end of the game, the drive never should have gotten than close.

Share All sharing options for: Logan Ryan's Pass Interference Was a Terrible, But Reasonable, Call

"Logan Ryan is going to get called on this penalty, he's just grabbing all over Andre Holmes on that left sidelide." - Trent Green

It was 3rd and 7 from the Patriots 30 yard line with a minute left in the game and the Oakland Raiders were going for it all against the heavily favored Patriots. The Raiders had no business being in the game, but New England let them hang around for the whole afternoon; Oakland wanted to make them pay.

It is pass interference if a defender extends an arm across the body of a receiver, regardless of whether or not the defender is playing the ball. However, the defender has to be restricting the receiver.

From the ref's perspective, it's clear that from their angle they see Ryan's arm and Raiders receiver, and former Patriot, Andre Holmes, scrambling for position. They throw the flag. That's fine.

The issue is that Logan Ryan has as much of a right to the path of the ball and he's actually in the better position. He's inside and Holmes is the one interfering with Ryan's path to the ball.

Of course, this is a ticky tacky call. By the letter of the law, it shouldn't be called pass interference. In the action during the game, especially from the referee's point of view (who isn't looking where the ball is heading), it makes sense to throw the flag.

Why bring this up? Because some might talk about how the Ryan penalty and the ensuing holding penalty against the Raiders didn't match with individual's opinions. 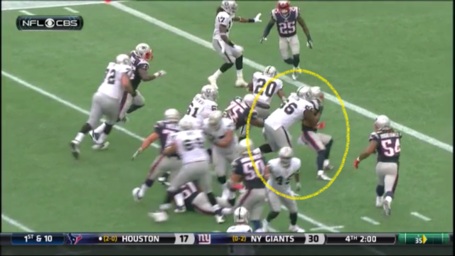 Hands that "encircle a defender are considered illegal and should be called for holding."