This may be a point of contention, but there's no way to avoid this: the Patriots are walking into a lion's den.

The Patriots are traveling to Kansas City for Monday Night Football and it is going to be loud. The Chiefs have announced that they're going to try and reclaim the stadium volume record, snatched away by the Seahawks last season, and they want to do it against New England.

The Patriots are known for having one of the worst homefield advantages in football, generally ranking at the bottom- or even dead last. The Chiefs, on the other hand, rank 2nd and 5th, respectively, in each ranking.

When the Patriots snatched away guard Brian Waters, a former Chiefs great, to play right guard in 2011, the media couldn't help but ask him about the difference in noise level.

"Good question," Waters responded before a few moments of awkward laughter. "It's a tough question. You're right, I have played in some loud places, and this place can be loud -- at times."

A reporter then followed up with whether Waters thought the Foxborough crowd could be louder.

"You said that," Waters retorted with a smile. "I didn't say that."

Another reporter asked Waters if Gillette Stadium's reputation as a quieter venue was because fans had such high expectations for their team.

"I have no idea. This is my first year here. You have to ask someone who's been here a long period of time," Waters responded. "I'm not going to get into that one. That's not a good situation to really comment on."

Not ringing praise for Gillette. A lot of the other players notice, too.

What's the reasoning for the low advantage of playing at home?

There's the argument that the open-ended stadium doesn't present the acoustics needed for crowd volume, but anyone who's attended a game could tell you that all the noise concentrated and bottled up still wouldn't shake an opposing offense.

There's the traffic argument, that the Patriots are usually so far ahead late in games that fans need to leave early to avoid the terrible traffic. No team has more games with a 21+ point lead entering the fourth quarter since Gillette opened in 2002. The Patriots have 32 such games, exactly a third of their home games between 2002 and the end of 2013. Over that time span, 99.5% of games in that scenario result in victories- there's no need to stick around, right?

There's the cost argument, that the ticket prices are so expensive that only those who are there to watch the game as entertainment, and not those to be invested in the team experience, can manage to afford a ticket. That is fair, as the Patriots average ticket price trails only those of the defending champion Seahawks. Successful teams all have higher ticket prices, while the raucious crowds... 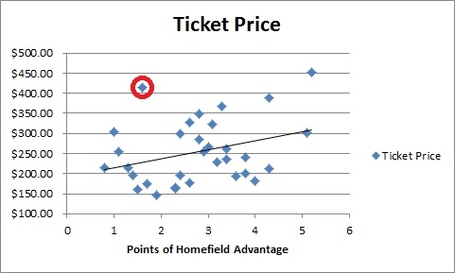 But that's just not the case in New England.

So the Patriots will venture to Kansas City and square off against the Chiefs and their insufferably loud fans. They'll do their best and hopefully leave with a win.

Next week, when the Bengals come to visit, I'm sure the team will be looking forward to the peace and quiet.