Patriots on Parks and Rec: A Future of Scandals

Share All sharing options for: Patriots on Parks and Rec: A Future of Scandals

I'm a big fan of Parks and Recreation, who just celebrated their series finale. I'm sad to see it go. There is not another show on television so consistently well written, heart-warming, and whipped cream covered so there will be a Pawnee-sized gap left to fill every week.

You might have noticed that during this final season, there have been more than a couple Patriots references sprinkled on top of the episodes. The show takes place in Indiana, where the citizens are all Colts fans. One of their leading men, Chris Pratt, is a diehard Seahawks fan who made a bet with Chris Evans, better known as Captain America, over the Super Bowl outcome.

Additionally, Michael Schur, one of the creators the show and a former SB Nation writer, is a huge New England sports fan (you might recognize him as Cousin Mose from The Office).

So it shouldn't come as much of a surprise that they'll take a few digs at the Patriots. I thought it was hilarious. They've made three mentions of the Patriots since DeflateGate, and here they are: "Belichick on 'RobotGate': 'None of our players are robots.'"

This scene takes place in 2017, and there's approximately a 38% chance that Rob Gronkowski will be bionical at this point, so this very possible. At what point does Gronk stop being man and start being machine? That's a fine line and it's a line Bill Belichick would have no problem pushing. 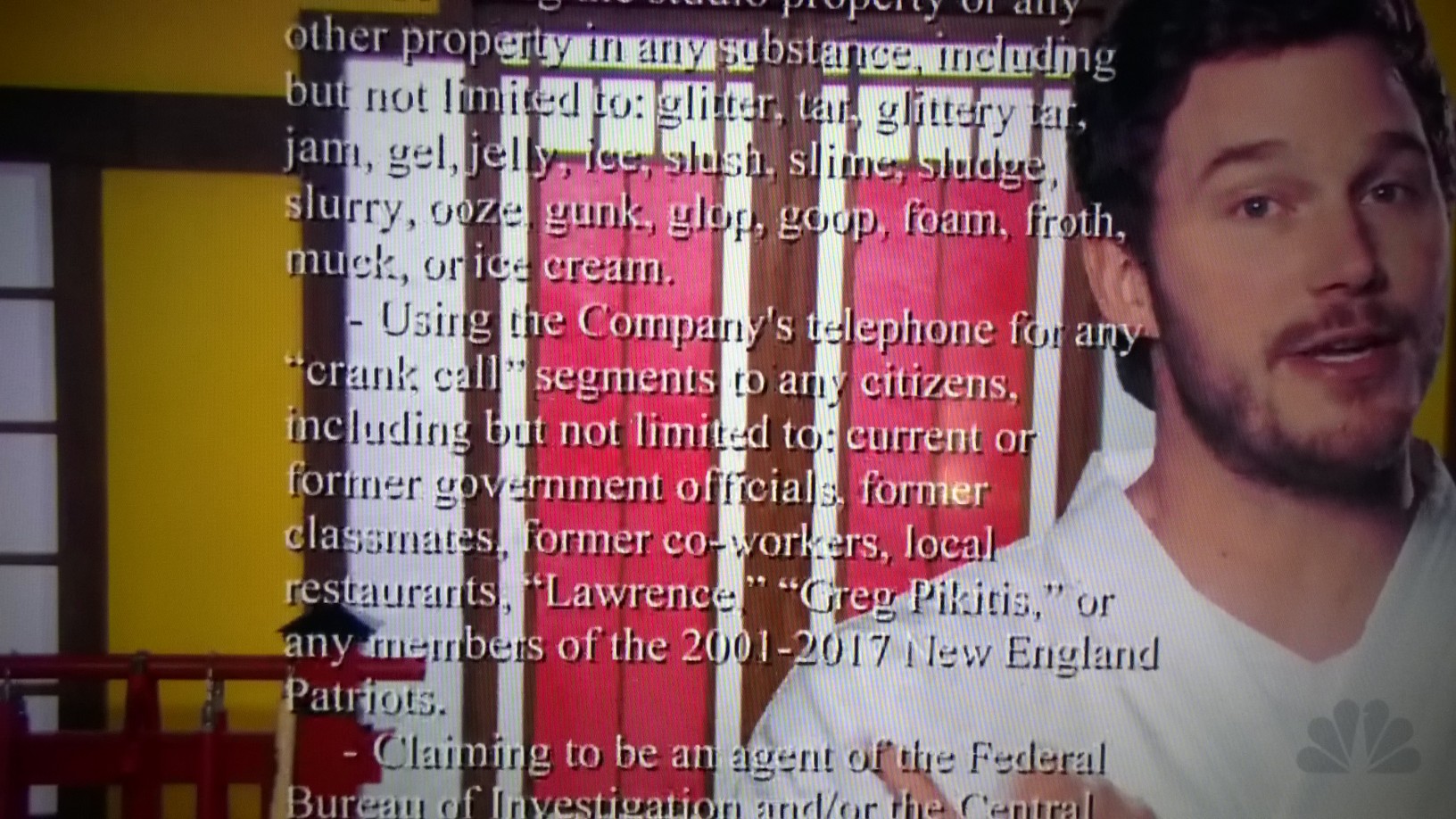 Andy Dwyer is a well-intentioned knucklehead who enjoys living out his childhood-inspired dreams. His character is a huuuuuuge Colts fan. Dwyer is given a local access television show. Of course he's going to use his show to prank call the Patriots, and then get in trouble and be told that he can't do that anymore.

"Belichick on AlienGate: None of our players are aliens."

Let's be serious, the first team to use extraterrestrial lifeforms on an NFL team would be the Cleveland Browns, but they'd do a terrible job and aliens would be viewed as a bad source of player potential. But then Belichick would sign an Alien, find them a role at, I don't know, fullback, and realize that aliens are perfect fullbacks and that it was really just a market inefficiency. And then the Patriots would get in trouble, even though another team did the same exact thing.

More importantly, this scene takes place 10 mayorial terms into the future, which means that this is supposedly taking place in the year 2057. Belichick would be 105 years old and still heavily involved in football.

I'll take that in a heartbeat.