Every night I fall asleep, comforted by my faith that Belichick won't sleep until he finds a way to do every part of his job just a little bit better than the rest of the NFL. And he has, in all facets of the game (except rule-bending). The draft is no exception. So let's take a look at how Belichick wins the draft every year, before it actually happens.

There's a lot of hoopla around the draft these days. I don't know exactly where it came from, but like many of you, I love watching film, analyzing players' stats, regurgitating pundit promises, and making predictions about who's going to draft the next All Pro player. I guess it's not that we stopped dreaming about playing ball, we just want to do it from the box seats now. But through the countless hours we've devoted to these labors, we know that draft day is unpredictable — even for real coaches, GMs and whatever ethereal title we're designating Belichick with these days.

That's why so much of draft day success comes from its preparation. I'm not an insider and therefore don't know how the Pats, or any NFL front office and teams of scouts prepare, or how that ultimately impacts their picks. But the Pats seem to stand out from most teams by accumulating draft picks, and of course by their consistent success in the league each year. But how unique is this approach?

The following is a graph that compares Average Team Performance with Average Draft Capital over the years 2008-2015. Try to find the Patriots dot...

Jump to figure to skip methodology.

Average Team Performance Ranking is each team's "end of season ranking" from the previous season. The ranking is defined by the inverse of the draft order (determined before trades). For example, having just won the Super Bowl, the Patriots draft 32nd, and their 2014 performance ranking is 1. The Seahawks are 2, and so-on until the Bucs at 32. For teams knocked out in the same round of playoffs, the order is determined by season record, with a bunch of other tiebreakers that can be applied. Even if a team didn't have a first round pick, or any pick at all in a draft, their Performance Ranking was still calculated.

Average Draft Capital is the cumulative "Approximate Value" (AV) of picks per draft, for each team. So not just the number of picks they have in that draft, but the sum of their values. Pick value is determined by a formula that reflects a single value for each pick number, independent of players that will actually drafted. Jimmy Johnson famously pioneered this method to evaluate packaged picks in a trade. For example, in this year's draft the Patriots have the 32nd pick, which has a value of 29.6, compared to the draft's first three picks, which have values of 73.2, 64.5, 59.4 respectively. Picks in the 7th round range from 3-5 points in value. Find out more about the formula, which was built by Chase Stuart. 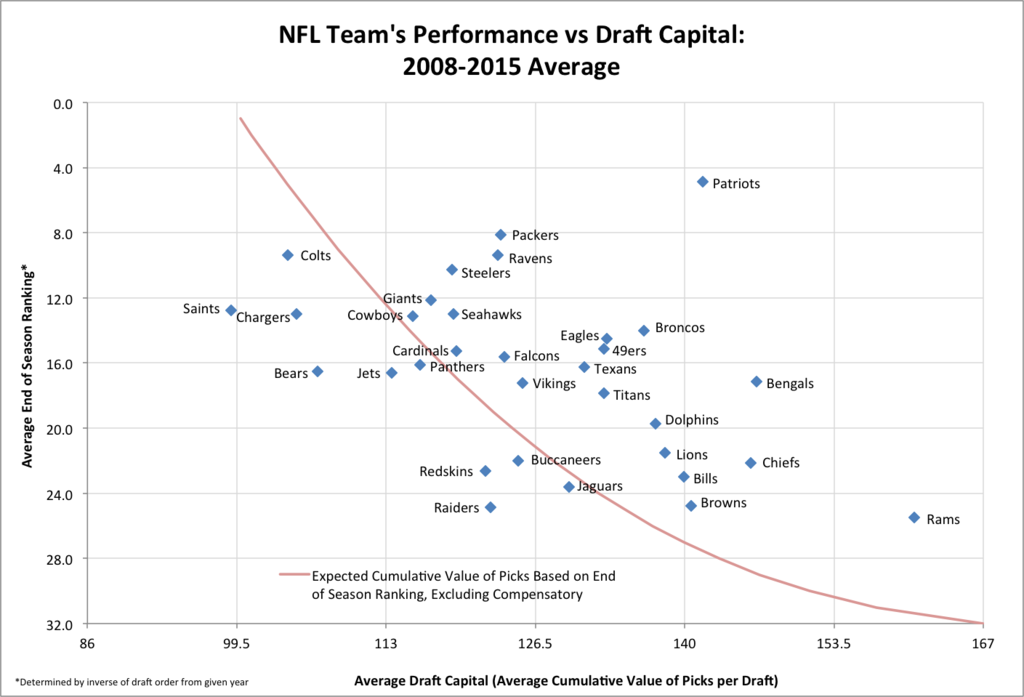 The red line reflects the expected average cumulative draft capital based on end of year ranking. For example, if a team finishes last in the NFL (ranked 32nd) every year, they would be assigned the first pick of every round, and should accumulate the highest draft capital each year. The opposite is true of a team that finishes first (wins the Super Bowl) every year. That's why the line slopes downward.

Teams to the left of the line have less draft capital than expected, based on performance, whereas teams to the right have more. The distances between each team and the red line reflect the impact of management / front office decisions, primarily trades and the accumulation of compensatory picks.

The fact that the Patriots have accumulated draft capital, through their frequent trades and savvy management of free agents, is no surprise. The extent to which they've outperformed their peers, and dramatically increased their expected draft capital, is mind-boggling. Since 2008, Belichick has gone into drafts with the 4th highest draft capital at their disposal among all teams, despite ending the season ranked better than 5th, on average.

It was always safe to say Belichick makes something out of nothing (see Akeem Ayers maneuver), but on average, he's accumulating draft capital that equates to the addition of the 16th pick, of the First Round — in every draft! The next closest team, surprisingly are the Bengals, who have added, on average, 27 value points to their drafts, or the equivalent of the 39th pick (7th pick in the 2nd round). The Rams have done well, primarily from their fleecing of Washington in the RG3 trade in 2012. Read more about how trades have impacted the Pats and other teams here and here.

Looking ahead to this year's draft, here's every team's 2015 draft capital.

The addition of so much draft capital has clearly contributed to the Patriots' sustained success. Before the draft even begins, Bill has added seemingly impossible value to his team by increasing their chances of drafting quality players.

The views expressed in these FanPosts are not necessarily those of the writers or SB Nation.