Julian Edelman and Wes Welker are two of the most productive slot receivers Tom Brady has ever had – does Welker’s career tell us what we might expect from Edelman?

Wes Welker, man.  It already seems like forever ago that he packed his bags for Denver after getting lowballed by the Patriots in 2013.  And then, just a couple years after getting boat-raced in the Super Bowl, it looks like Welker may be hanging up the spikes for good.

Sports Illustrated, Comcast Sports Net New England’s Tom Curran, PatsCap’s Miguel Benzan, and our own Rich Hill have pointed out that over the next year or two, the Patriots are going to have to work out new deals or walk away from more talented players than some entire divisions have put together.  You know the names – Malcolm Butler, Dont’a Hightower, Jamie Collins, Logan Ryan, all the homegrown talent – and whether to bring back guys on put-up-or-shut-up deals like Chris Long, Terrance Knighton, and Martellus Bennett.

Hence the trip to nostalgia city with Wes Welker. 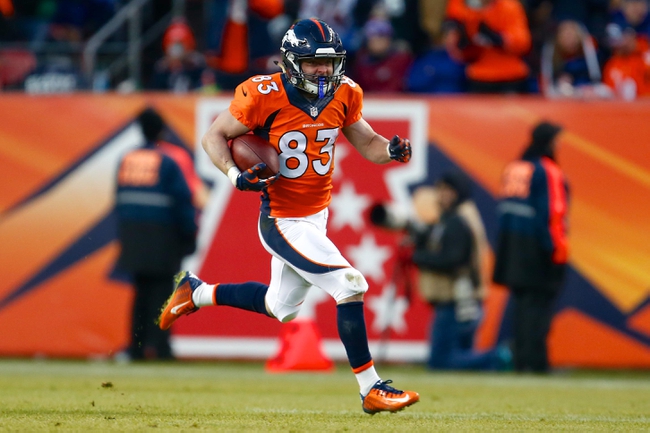 The original idea of looking back at Wes’s career with the Patriots was to try to figure out if Julian Edelman could plan on not coming back to New England after the 2017 season, when his current contract is up  – or if the team would ship him off during the last year of his contract for whatever draft pick someone was willing to deal.  Or Jules could stick around!  That’s what we’re trying to get at here.

Looking at their careers turned into a Mustang vs. Camaro, Chicago deep-dish vs New York style pizza analytical nightmare, in the best possible way.  If you’re choosing between any of those two things, you’re already having a pretty good day.

So let’s fast forward and rewind at the same time, and see if we can guess what may happen to one of the best slot receivers Brady has ever had – by looking back at what happened to the guy he replaced.

Let’s be clear about one part of Welker’s career that can’t be disputed – the dude was still tearing up the league and rewriting the Patriots’ record books in his final season.  You probably remember New England franchise-tagged Wes for a sweet $9.4 million in 2012, and all he did was go out and haul in 118 receptions, for 1,354 yards and 6 touchdowns.  It sure looked like Welker was Wolverine without the claws and had done all he could to show the Patriots he had busted his tail for a new deal.

Thing is, Wes Welker turned 32 that offseason, and when he felt , perhaps rightfully, insulted by New England making him an offer he thought didn’t reflect his value, he went to Denver.

Edelman, who has a birthday on May 22nd, just a few weeks after Welker’s, will be 32 after the 2017 season ends and before training camp starts for 2018.  Hmmmm.

Here’s where comparing Wes and Julian’s respective careers goes off the rails a little bit.  Welker came into the NFL in 2004, didn’t start a single game until 2005, then spent ’05 and ’06 with Miami (amusingly, while Bill Belichick’s buddy Nick Saban coached there), and then Wes finally made it to New England in 2007.  All he did his first season in New England was catch 112 passes on 145 targets, log 1,175 receiving yards, score 8 touchdowns, and return kicks and punts.

Just a couple years later, Julian Edelman was drafted 232nd in the 2009 draft and went right to starting 11 games in the ’09 season, hauling in 37 receptions on 54 targets for 359 yards and a touchdown.  He also missed a good chunk of the ’09 season with a broken arm, but came back in Week 10 and scored 2 more touchdowns in a wild-card playoff loss to the Baltimore Ravens.

That’s a heck of a start, but the kid that would become Minitron barely saw the field in 2010 or 2011 except for kick and punt return duty, and (shiver) emergency defensive back in 2011.  Edelman finally hit his breakout season in 2013, when – you guessed it – Welker left for Denver.

Let’s check out how the two match up on the stat sheet after the 2015-2016 season (per Pro Football Reference):

Edelman obviously isn’t done yet, so I projected what his career may look like by end of his contract.  The assumptions were 90 receptions per year, 1,000 yards, and 6 touchdowns per season this year and next year, which is basically the line he’s capable of when he’s healthy.

Here’s where production comes in, besides helping you win your office league – playing slot receiver like these guys do means you’re more often than not getting hit, and hit hard, after making the catch.  We like to think of Wes and Jules as invincible, but there’s no getting around that part of the game.

So let’s see how Welker’s production went in his last few years in New England.

And then Edelman’s yards in his 2012 season that put him back on the map until now:

Wes Welker had a last year with the Patriots that most wideouts would die for – 118 receptions, 1,354 yards, and 6 touchdowns, and was still not to be messed with in 2013 (his first year in Denver), but that’s when it started going downhill – fast.

So he ripped it up at 32 years old in Denver with the highest-scoring offense the NFL has ever seen, but after that, the dropoff hit like a Vegas hangover.

Remember just a second ago, when we said Edelman will turn 32 after his current deal is up in 2017?

Ugh, the worst part of football, without question.  Most of us would rather watch every second of every Cleveland Browns game and the post-game than watch one more replay of an injury like Brady tearing his ACL in 2008, after the 2007, 18-1, get-bent-New-York season.

Wes Welker’s concussion issues over the last few seasons are scary, to be sure, but for years in New England, Wes seemed like he was on a Super Star the whole time.  The only part of his career when Wes missed significant time was when a Bernard Pollard hit ended with Welker tearing his ACL and MCL in 2009’s Week 17 game – and then he rehabbed in time to play in the Week 1 opener against the Bengals in 2010!  And not just "play" – Welker caught 8 passes for 64 yards and 2 touchdowns in his first game back.  Didn’t miss a beat, just got right back to doing Wes Welker stuff.

Julian Edelman’s injury history is trickier, to say the least.

Jules actually started his Patriots career in 2009 with…an ankle injury that forced him to miss the season opener.  Later that year, he broke his arm in the famous 59-0 Patriots-Titans snow game bloodbath, and then came back in time for Week 10.

2010 and 2011 barely let Edelman get on the field, except on return duty and nickel/dime cornerback snaps, and 2012 wasn’t kind to him in the injury department.  He missed three games after a week 3 injury, and after coming back, broke his foot in December and went on injured reserve.

2013, though, was when Julian Edelman really blew everyone’s expectations out of the water, logging his first 100-catch season and played in all 16 regular-season games.  And when Jules decided re-signing with the Patriots was the way to go in 2014, he played in 14 games, almost matched his best season’s production, and, oh yeah, caught the dagger touchdown in the Super Bowl.

Aaaaand that brings us to last season.  A broken foot against the Giants sidelined Edelman until the playoffs, then he looked like he was back to his shake-and-bake connection with Tom Brady, and then this offseason, Jules needed another "cleanup" surgery on his foot.

According to that same report about Edelman’s most recent surgery, he should be ready to rock and roll for the 2016 season opener, and since he was right on track to match his ’13 and ’14 production (61 receptions, 692 yards, and 7 touchdowns in 9 games) last year, the ’16 season should be another one full of Jules putting defenders on ice skates.

2017, though, is when it’s decision time.  Yes, Edelman’s current deal runs through the 2017 season, but there’s decisions the Patriots need to make before that.

The team could offer a one or two-year extension to keep him in town, and more importantly, keep Edelman off the free-agent market, where he’d surely have plenty of teams telling him to "Shut up and take my money!".  An extension, though, probably isn’t coming at Edelman’s current rate – the deal he signed in 2014 was a 4-year, $17 million contract that definitely doesn’t reflect his current status as one of the league’s most un-coverable pass catchers.  How about a 2-year deal like the one the Patriots offered Welker before he left?  Maybe, but then you run the same risk of insulting a great player with a contract they think is a joke.

New England could also let Jules hit free agency after the 2017 season, but if that happens, there’s absolutely no way the Patriots are bringing him back.  Mohamed Sanu just got 5 years and $32.5 million from the Falcons, while his bud Marvin Jones got 5 years and $40 million from Detroit, and Edelman is more productive than both of those guys, stat-wise.  His market price will be bananas if he’s a free agent, and letting Jules even reach free agency would be letting him go.

The Patriots, and this will churn your stomach, could also trade Edelman before the 2017 season – or during it.  You guys surely don’t need any reminders on everyone Belichick’s traded away that’s still playing BAMF-level football.  It could happen.

So, no need to panic quite yet, but if Edelman goes out there and rips it up on the field this year like everyone in New England hopes he will, expect to hear all kinds of chatter about the Patriots’ favorite slot guy.  There’s a reason almost none of the great Patriots retire as Patriots, after all.